One sunny day on the outskirts of Jerusalem, in a small vineyard on top of a hill, the grapes are left unexpectedly untended. The fields are empty of man, farm tools strewn across the earth. The usual bustle of pruning, raking and harvesting is at a complete standstill. The farmer who has cared these fruit day in, day out, for sixteen years seems to have neglected them and disappeared. A look around the farm would reveal the very same man in a nearby warehouse, holding the same tools for a different purpose. He is chiseling rock, a blissful expression on his face. This is the fascinating story of the artist Gadi Fraiman, a farmer with a gift for sculpting who made the unconventional decision to leave everything safe and known behind, instead choosing the risky and fulfilling path of becoming an artist.

Art was always an innate force in Gadi, who did not take the normative route to professional artistry. As a young man, at the peak of his artistic curiosity, Gadi was living on Kibbutz Mishmar David, a collective commune, working as a farmer. He had no money, emotional support, nor formal artistic education. Nonetheless, art found a way to express itself through Gadi. This is the sign of a true artist, one who must create no matter the circumstance. “I don’t think that I can be something else than what I am,” reveals Gadi at old age, “I tried.” As a 22 year old farme,r Gadi learned to cultivate the Jewish land of Israel in the beautiful Judean foothills of Jerusalem. The job taught Gadi patience and perseverance in nurturing the earth. Farming seemed to suit Gadi, a well-built man for whom physical labor comes easy, who enjoys the hours of solitude and silence in the fields. His many moods and internal seasons match the everchanging temperament of the wilderness where he works. However, Gadi found himself dissatisfied with his job. Although he loved farming, he felt called by a much greater passion, sculpting. With meagre means, he used an abandoned chicken coop in the Kibbutz and the farm’s rusty tools to sculpt in the small hours of the night.

Although Gadi was untrained officially as an artist, this did not deter him. The love between him and stone was unstoppable. The moment he hit the rock with a chisel, it was a natural dance. The flow of life turned formless mounds into undulant, ethereal creations. Gadi’s hands knew what to do, the strength, perseverance and stamina learned in his day-job serving him extremely well to nurture the rock formation and tame it into art-form. His autodidactic abilities of art and his understanding stone seemed to be intuitive and deep-rooted in him. Gadi spent what little free time he had sculpting. He followed his passion relentlessly, facing his barriers and frustrations with ease and patience, gaining vast knowledge and experience that over time deepened and refined the quality of his artwork. He began to collect rocks in the desert and to form series of work, sculpting figures from the Old Testament, gracious women, animals, and abstracted shapes, all from his own mind’s eye. 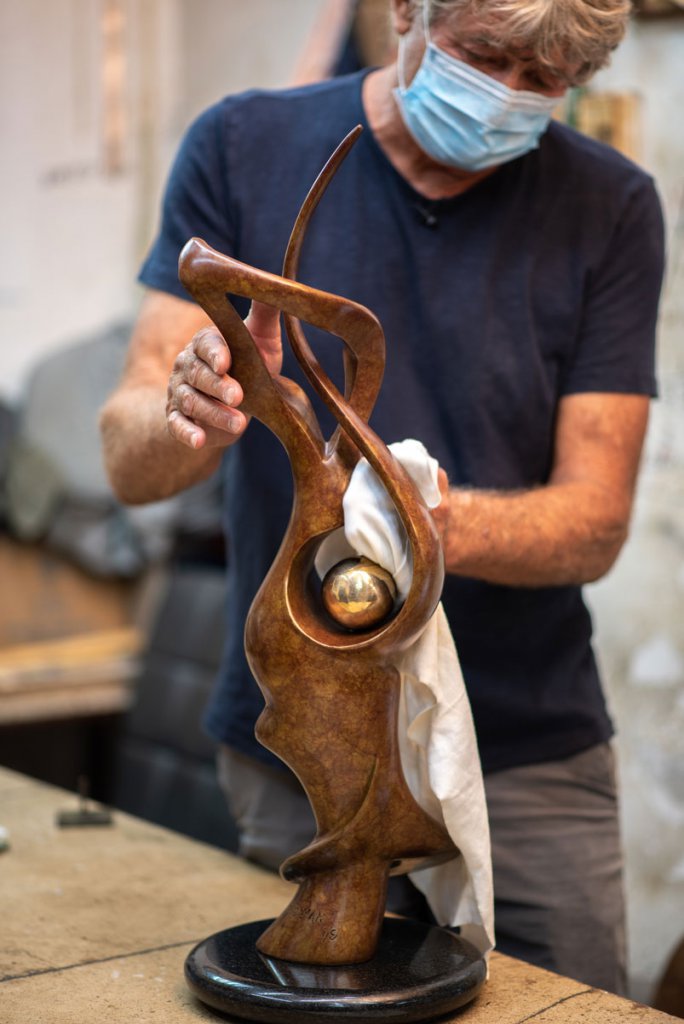 Gadi was always enthralled by artistic practice. Born in Poland to Holocaust survivors who immigrated to Israel when Gadi was 8, he came of age in a land that was coming of age. When he was young, he turned to art as a distraction- a way to escape the inherited trauma of his parents. He used to get lost in daydreaming, conjuring up artistic visions in his flourishing imagination, sometimes drawing and sketching these. This time left alone to indulge in fantasies instilled in Gadi the unique ability to devise fully formulated dreamscapes in his mind of things he could create: a critical skill of foresight for a sculptor.

The inherent drive to create continued to flourish during his twenties and thirties, whilst resuming his daily responsibilities as a farmer. Over time, however, the practice which began as a mere pastime gained momentum and a life of its own, growing in size and volume, as well as beginning to receive the attention of notable curators and collectors. As art was requiring more of Gadi’s resources, at age 40 he made the irrevocable decision to quit his job in the vineyard to focus solely on sculpting. Step by step and with stubborn hard work, Gadi expanded his oeuvre, working with myriad types of rock and casting in bronze. His practice evolves over time, as Gadi brings his unique touch to new technologies, stretching his practice across contemporary mediums and themes.

In 1995, Gadi opened a beautiful new studio at the top of an isolated hill in the outskirts of the Kibbutz, alongside a picturesque sculpture garden, where he finds peace and quiet to create to this very day. Over the years, Gadi’s work has become celebrated, sold, and exhibited in galleries and public spaces worldwide. His works are known for their fluidness of form, shape-shifting flow. Life has led Gadi on an interesting journey, arriving to his true calling as an artist, spending his time in boundless creation.

As he grew older, Gadi nurtured the love of his land to become a farmer, growing grapes in vineyards in Kibbutz Mishmar David in the verdant Judean Foothills.  What began as childhood escapism grew into a joyful hobby  that Gadi pursued whenever he wasn’t in the fields.

At age 40, Gadi made the courageous decision to take his artistic devotion to the next level, leaving his job in the vineyards and focusing on sculpting full time. Gadi’s unbridled passion for his art and his constantly evolving creative approach define his signature style. Gadi’s sculptures capture this fervent kinetic energy & flow almost as if a spark of life is growing inside each of them.